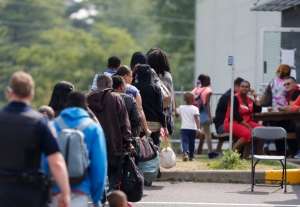 In recent weeks, the number of new asylum seekers, mainly from Haiti, crossing the US border into Quebec has risen dramatically. On Friday, August 11, as many as 1,200 people were waiting to file refugee claims in Saint-Bernard-de-Lacolle, Quebec.

UNHCR Representative Jean-Nicolas Beuze was interviewed on CTV News to address the situation. Watch the 4 minute video below to find out: why so many asylum seekers are heading to Quebec, why they are leaving the US, if there is any substance to the fear that the province of Quebec will be overloaded by the sheer number of refugees, and what determines if an asylum seeker can stay in Canada.

Copyright © 2022 Associated Gospel Churches
To Top
A
Join Our Newsletter
Are you able to help Ukrainian Refugees come/coming to Canada? Please tell us how!