Embracing a New Life in Canada 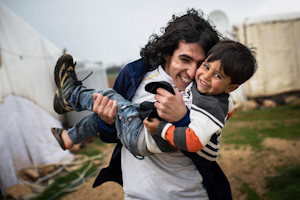 As we get further and further along in this humanitarian crisis of displacement and people forced to flee for their lives, more and more have come to Canada and are resettling into a new life here.

This month, we would like to high-light the story of 22-year-old Hany Al Moulia who fled Homs, Syria a year after his youngest brother was born in March of 2011. After graduating high school he knew "he would be conscripted into the army. And then his cousins were murdered in their homes. It was time to get out."

His family fled to Lebanon, to an informal refugee settlement in the Bekaa Valley. The starkness of their situation gradually sank in as they realized there would be no going back to Syria. They were refugees. Three years later, in 2015, Canada called offering the Al Moulia family resettlement in Regina through the government sponsored refugee program. "Hany immediately started learning about Canada. 'I read a lot,' he says. 'I read about the weather, the immigrant system; the multiculturalism; it's a very big country.' They arrived in Canada in June of 2015."

After the big push to bring 25,000 Syrian refugees to Canada in 2016, there are over 40 Syrian families currently living in Regina. Hany as an experienced newcomer, has helped some of the more recent refugees settle into their new homes.

"Hany understands that Canada is a country founded on immigration and that leaving someone or something behind is common to many Canadians’ experiences or backgrounds. 'Everybody, even if you just move from one province to another, feels like you’re missing something, like you want to go back, that’s the immigrant experience,' he says. 'That’s normal; everybody feels like that; just go to the next level, don’t ignore it, use that feeling. For me, if I were to say to myself, I wish that I could go back, the truth is it’s not happening. I can have new friends; I can have new things; I can bring that happiness that I used to have here,' he adds."
Today, Hany is studying engineering at Ryerson, and has been selected as one of 15 young Canadians to be the first members of the Prime Minister's Youth Council.

"I tell people that before coming here I had a normal life. We used to have everything that you have here. We are just interrupted. We are people just like you, skilled and educated…" Hany Al Moulia

You can read his whole story here, on the UNHCR website.

*All quotations are taken from the original article on the UNHCR website, accessed July 17, 2017