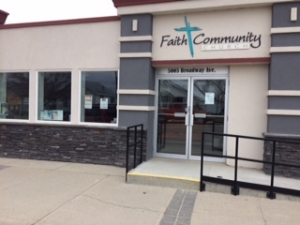 At this point, it is still a waiting game but way more so for Ruth and Joseph* and their three children.

We worked closely with our SAH (the Alliance Church) and their representative Hannatu as she helped us work through the thorough template they have crafted for sponsorship. That process took us about two months as we emailed back and forth with Ruth & Joseph getting them to fill in their documentation even as we did ours. After the initial review of all our paperwork, our SAH then sent the file on to Immigration Canada. This was an invaluable time saver as it virtually eliminated all the mistakes we might have made and saved the time of resending.

We were accepted by Immigration Canada to be the sponsor for this family and received the notification for that on June 6 of this year. The documents for the family’s application were then forwarded to the Canadian Visa Office in Singapore and are awaiting processing there.

We keep in contact with Ruth & Joseph via emails and the occasional Skype call. In the last Skype call we talked with them briefly about the need to begin some basic education for their children while they are still waiting in Bangkok. Our concern is that the twin girls should be at a grade two level in English and will find entry into Canadian culture and education a difficulty. I sent some basic primers to them via PDF files but haven’t heard back yet as to how that is going.

Our team is maintaining a state of preparedness. One of them recently took in a training seminar in Edmonton on integration and it’s challenges. At this point we are keeping the congregation in the loop with every new development but it is too early to begin gathering supplies or household effects as storage for anything is a barrier. We do hope to launch a campaign shortly where we will hand out five plastic bins to five interested people from the congregation, people who are not already on our organizational team. Each bin will have a list of basic needs and a picture of one of the family members on it. That person’s task is not to purchase all that is needed but instead to try to find others who would be willing to help with the small things (tooth brushes, etc.) and then store them in the tote until such time as needed. It’s a way of dealing with storage but also a way of sharing the joy of caring for this family.

At this point our fund raising is almost at the $20,000 mark and we will be having another major fund raiser on the 30th of September. We have been blessed to have a number of other churches partner with us in this. Delburne Gospel Church, a sister AGC church, has raised over $1700 to help. Another ‘new to the family’ sister church in Two Hills, Alberta, a One Hope church pastored by Pastor Warren Charlton has sent over $700. Warren is our Cluster Group Chair and has allowed me to share in our group with the other churches about where things have progressed. We are helped in an ongoing way from our sister church at Stoney Plain, East Parkland Bible Church. These folks have been an encouragement for a good number of years to us and we have been blessed time and again by them. There have also been others not in our congregation who have been generous supporters of the Joseph family sponsorship.

In our last call with Ruth & Joseph they are doing well in terms of health and emotional balance. They have a wonderful team of Thai nationals who are a great comfort to them, worshipping with them, loving them, providing food and other items as needed. Recently Joseph has been able to get a little more work but is very careful as to how much attention he might attract. There have been changes in the kingdom of Thailand and this has caused an increase in policing and immigration security. The effect on the family is to have to keep the children in the room they live in more than they usually do. If they need to go out only Ruth or only Joseph goes with just one child if needed so as to not attract attention. So it is a tense environment but this couple is such a blessing in their faith and in their attitude as they constantly remind us of their willingness to rely on God even as we do the same. Their selflessness is a remarkable thing to witness.

We pray God will allow us the joy of seeing this sponsorship through and we look forwards to the next email notifying us of the time when their interview is scheduled and then to the steps just after that when finally the green light is given to come to Canada.

Spence and Marci for the team at FCC

*Names have been changed to protect their identity.