Mehmood and one of his sons ran a successful tailor business in a predominantly Muslim area in Lahore, Pakistan. An escalating series of physical attacks and threats on their lives by local Muslims forced the whole family to flee their home in 2013, leaving behind all their precious possessions and finances. With the help of others they managed to arrive in Malaysia where they are seeking asylum and praying for sponsorship to Canada.

Profile: An extended Pakistani family of 8
Risk: Death or imprisonment if they return to Pakistan
Advantages: Relatives in Kitchener, Ontario willing to help with some funds and
some settlement support; adults have transferable skills
Seeking: A church willing to sponsor this family, providing the needed financial and settlement support

We were living in Lahore in a small rented house, near Mosque Jamia. I was leasing a shop where I ran my tailoring business and had a cross and some Bible verses put on the walls of my shop. Every day three Muslim people would come and threaten me by saying to remove these religious things and become Muslim.

One Thursday night they came to my shop and warned me harshly saying, "Do not open your shop on Fridays because when we see these so-called holy things of yours in your shop after saying Juma prayer, our prayer is made vain and if you do not listen to us we will kill you.”

I was greatly distressed after listening to their threat as I was the sole provider for my family. Despite being afraid I decided that I could not close my shop. I needed to work to feed my family.

First Attack: “We will not spare any Christian alive.”

On Friday I opened my shop as usual and started working. After the Juma (Friday) prayer, two of those men who had threatened me came and dragged me out of my shop. One of the two caught me from the back and the other one immediately stabbed me in my leg. I began to faint and heard them declaring, "We will not spare any Christian alive."

I fell on the ground and they left me injured. When my wife went with my children to the police to report this incident the police took no action because they were also Muslim.

After that horrible incident we decided to leave that area and go back to my hometown.

After a while I started a new tailor business with one of my sons and the business was going well. It was located in a market with other Muslim tailor shops and drew the jealousy of the other tailors due to our success.

The Muslim tailors began to threaten us saying, “Leave the shop and flee from here you bloody Christians. How can you do better than us in business?” I tried to reason with them but they continued to threaten us.

One day some time later we were physically attacked by 10 people, beating us brutally with sticks and breaking our machines. My older brother came to save us and was also beaten. They left us, warning that they will kill me, my wife and children because we did not listen to them and quit our business.

Three months later I had to resume our business as I needed money to support my family. Again we received threats against us and our business.

Four more years passed before the final brutal attack which drove us from our homeland.

My son and I were working at our tailor shop when three of our customers came to pick up their orders. One of them started to preach the good news of Islam. I responded politely and said, "My faith is in Jesus Christ and I cannot betray Him." He challenged me and then gave me a copy of the Holy Quran.

I told him, “I cannot take it as it is written in Arabic and I don’t know how to read it. Secondly, I have my Holy Bible to read and so cannot receive it.” 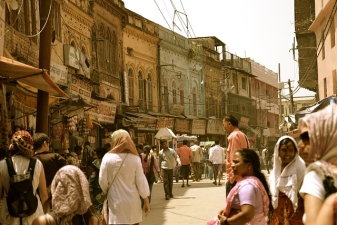 He took the Holy Quran and deliberately dropped it on the floor to set me up. The three men walked outside and started shouting “Allah Hu Akbar!” and stirring up people in the market, saying, “These infidels have torn and thrown the Holy Quran on the floor and have blasphemed Prophet Muhamad.” Within a short time a mob had gathered. As my son and I tried to escape our shop we were violently kicked, beaten and spat on. By the grace of God we escaped and made it home.

I quickly gathered my family and, leaving all our possessions behind, fled for our safety. The police went first to my business and then to our home looking to arrest us, as the three men had filed a report against us, accusing us of blasphemy. We know of hundreds of Christians in Pakistan who have been handed over to the police and ended up tortured, murdered or left to rot in prison for decades. Some were burnt alive or beaten to death by mobs.

We took temporary shelter at a relative’s home and then were financially helped by some Christian supporters to get visas to leave Pakistan for Malaysia. We’ve been asylum seekers in Malaysia since 2013, unable to return to our homeland of Pakistan under risk of death or imprisonment. Our greatest hope is to move to the wonderful country of Canada where we can experience the freedom and liberty to practice our faith in the Lord Jesus Christ.

If you can help this family find a durable solution to their forced displacement by sponsoring them to Canada, please This email address is being protected from spambots. You need JavaScript enabled to view it.our SAH Representative.